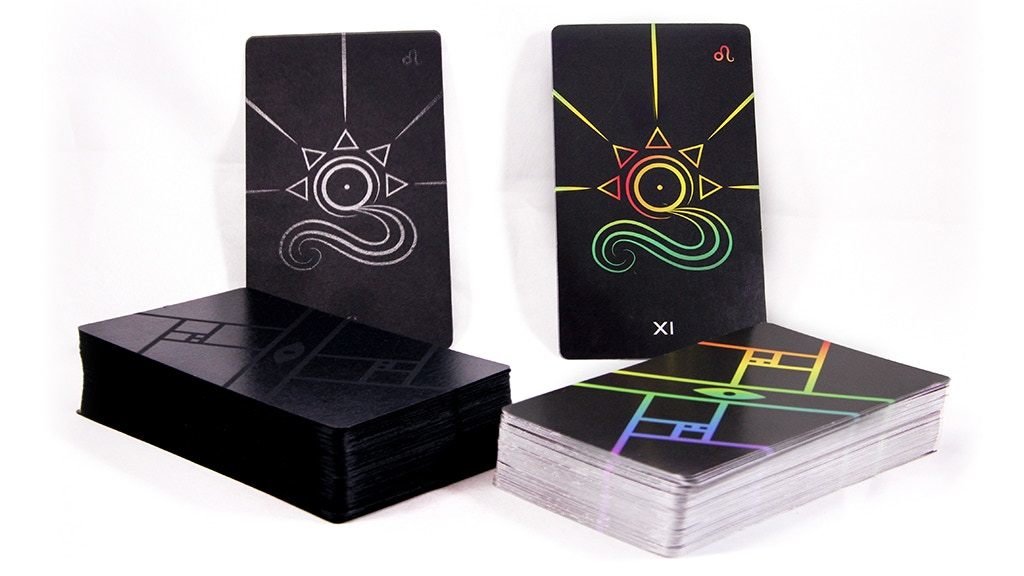 A completely new way to explore the magical and philosophical symbolism at the heart of this classic divination technique.

Latest Updates from Our Project:

Hello once again fine people out there,

We have a single week remaining, and we are so close I am already preparing to get things rolling. I don't want to pull the trigger until I'm sure, but at this point, I'm pretty sure we're going to get there. I am astounded at how much progress we've made, by how far we've come. Every day I'm blown away, and I wouldn't have it any other way.

I wanted to share some Minors, I posted these on the main page too, but I figured an update would be a nice highlight.

In order we have the 2 of wands (Mars in Aries), the 3 of Cups (Mercury in Cancer), the 4 of Swords (Jupiter in Libra) and the 7 of Disks (Saturn in Taurus). Each suit has a different color based on the element, and the bottom of the cards also feature designs relevant to the element.

Thanks again, and please share the Sigil Arcanum with people you know who might be interested in Tarot, the occult, sigils, or any other weird stuff like this. They're the best of company, I've found.

By popular demand I have decided to add a new tier for 3 decks at $100 (plus shipping). As a reminder, you will be able to select which types of decks (one color two black, or whatever combination) in the BackerKit survey which will be sent out after May 11th.

So if you would like to add an additional deck, feel free to change your reward to the new tier. Thanks again everyone!

Wow what a whirlwind of a week this has been! I'm so excited to share that we are now over halfway to May 11th, and well over half way funded! In fact, we're about three quarters of the way there as I write this. I cannot express how happy I am that this project has taken off the way it has, I'm so glad to see so many people finding these cards and really resonating with the designs. It means the world to me to see that my efforts were not in vain.

All of that said, this next part is the hardest part, we need to pull together the rest of the funds in 11 days, and I know we can do that with your help, yes you! Please share this project with other people you know who are interested in Tarot, Astrology, Alchemy, or Philosophy. The more eyes laid on these decks the better. Remember, we are making this happen together, without massive marketing campaigns or the support of large corporations. I am one person, and you all are the reason this is even possible.

Today I wanted to talk a little about the High Priestess card because it's one of my favorite designs. It is also one of the designs that changed the most dramatically, so I wanted to feature some of the original versions too.

Here's the newest version which appears in the deck:

There are four major symbols that make up this sigil: The Moon, the Flower, the Spiral, and the Columns. Let's start with that last one. In traditional decks the High Priestess is often depicted between two columns (a black and a white column) which have a B and J on them. These letters stand for the words Boaz and Jachin, two pillars that held up the temple of Solomon. In other words, these are the left and right pillars of the tree of life. The middle pillar extends upward through the spiral, the flower, and the moon.

The spiral is indicative of the subterranean nature of the High Priestess, it represents that omnipresent force of nature that spells itself out in a spiral we call the Fibonacci, which by the way, is reflected on the card backs as Fibonacci squares. My thought behind this is that the High Priestess is someone who owns the winter when the world has turned underground, when life pauses and waits. This energy felt appropriate for a spiral which also runs in cycles, and which sprouts from the ground each Spring when the frosts thaw.

The "Flower" as I describe it is the orange shape that looks kind of like the head of a tulip. It is also a common Egyptian headpiece adorned by Isis, who is certainly a Lunar Mother Goddess. Depicting it as a flower helped me to complete the image of the spiral as the stem and spine of life. Projecting outward from the Flower are three lines which connect all three pillars.

The moon is fairly self-explanatory, it is the ATU or House of this card, and figures prominently into the High Priestess energy.

Here is what the original looked like in B/W and color:

As you'll notice, the House on these older versions was Scorpio. I found conflicting sources on what the proper ATU for each major was, until I found the best source: The Thoth Deck. Scorpio is Death, the 13th major.

I am back after a week of travel and intrigue, and I apologize for the lack of updates during that time. I was away from technology and in a different country, but now I'm back and ready to keep this update train going!

We are 70 % of the way to this incredible goal! How amazing is that? Every day Kickstarter continues to surprise me, and every day it seems more and more people are finding this project. Thank you all for taking the time to look at this project, and thank you especially for backing it, for putting your money where your mouth is and showing the world that this deck is worthy of being made.

Today I wanted to talk about that fabled final card of the Tarot, the World, the card that ended it all. It is the Universe in a nut shell, and it is the answer to everything: The philosopher's stone.

This card has a few things going on and I want to describe them as best as I can, and explain why I chose these particular symbols for this card. Traditionally the World is depicted as a person (usually a woman) standing in the center of a Vesica Piscis (the intersectional area of a venn-diagram basically). I chose to use ten circles to represent each of the spheres of the Tree of Life, and I discovered that this pattern creates a number of Vesica Piscis(es). These ten rings fold together to form a flower like a blossoming lotus, the center of which is the philosopher's stone itself. The four elements blend together to create the Circled Square in the center (the red symbol), the symbol of Alchemy and the Great Work completed. This card is in a number of ways a reflection of the Fool, but it is also its opposite. The ATU for the Universe is Saturn, the planet of time, changes, and death. It is a card of fate.